LAC-BEAUPORT, Que.–To anyone peeking through the blinds of cottage No. 1 at Auberge Quatre Temps on this crisp fall day, it looks like a Frankenstein experiment.

Freestyle skier Kyle Nissen sits on a couch, electrodes fastened to his jaw and scalp, sensors on his fingers, all hooked up to the computer he’s staring at in near zombie-like fashion.

Canada’s Olympic athletes being programmed for the podium for the 2010 Winter Olympics?

That’s sort of the idea.

The Canadian freestyle skiing team signed on for the bio/neurofeedback training program through their sports psychology consultant, Penny Werthner. She’d been interested in pursuing it but lacked the resources until Own the Podium, set up to help Canada become the No. 1 medal winner in 2010, provided the money two years ago.

The skiers jokingly refer to it as “brain pain” and kibitzed that Werthner is some kind of mad scientist when she showed up here at a recent aerials training camp, but don’t let that fool you.

The program is designed to help them develop the skills to reach the optimal mental and physical state to perform at their best – and they are convinced it’s paying dividends.

“It’s a very, very powerful tool, and we’re lucky as Canadians to have the opportunity to be able to work on it,” said Steve Omischl, who last year won his fourth men’s overall World Cup aerials title.

Moguls skier Alex Bilodeau made a huge breakthrough last year, transforming himself from an athlete who dominated training but couldn’t convert on race day into a tour de force who captured the men’s overall crown.

“You need to know yourself and know how you react to those moments and how you need to feel,” said Bilodeau. “That’s something that the neuro/biofeedback makes you learn about yourself.”

What Werthner is trying to help the skiers with is their ability to focus and manage Olympic-level stress. The electrodes and sensors give both her and the athletes an ability they’ve never had before to measure those aspects and train themselves to have better control.

The electrodes and sensors are hooked up to five modalities physiologically – muscle, skin conductance, respiration, body temperature and heart rhythm – as well as neurologically to different spots on the head depending on what is being worked on, focus or recovery.

Brightly coloured charts on the computer screen show the athletes their real-time responses and they learn what brainwaves are optimal for recovery and performance.

The athletes learn breathing and focusing techniques to better control these things and are given a greater awareness of where they are holding tension in their bodies and how to relax.

There can also be a good deal of frustration, and Werthner and her research assistant, Margaret Dupee, keep an eye on that. They can adjust the difficulty of any exercise like the tension on a stationary bike. As the athletes gain mastery of a skill, they ramp it up.

“We’ve always talked about getting into that ideal competitive state, but I think now we’re just getting more and more refined with it,” said Nissen, one of the world’s top aerialists.

Most of the athletes will have had more than 15 sessions totalling 30-plus hours leading up to the Olympics.

Even aerials coach Daniel Murphy has been getting the training so he can be better focused in dealing with the athletes.

The encouraging thing for Werthner was that in evaluating the athletes at the end of the first year, she found most retained what they learned.

“It’s not a miracle product that will make you focus just like that,” said Bilodeau. “It’s something that will help you and put you in the state of being focused or to be able to focus, but it will not focus for you.”

Werthner, to her credit, does not oversell what it can do.

“It doesn’t mean they’re not going to get stressed, it doesn’t mean we aren’t going to have issues,” she said. “But I feel much more confident in working with the athletes I’ve worked with on this when I say, `Okay, you need to go to your breathing, you need to relax or here’s where you need to focus.’ They have such a greater depth of understanding.”

As Nissen gets up to leave his session, he departs with a little more self-knowledge, not to mention the big dabs of gel in his hair that were used to hold the electrodes in place.

“You always leave here with that goop in your hair,” said Nissen.

Adds Werthner: “You don’t want to be going on a date after seeing us.”

But perhaps a future date with the podium is in order. 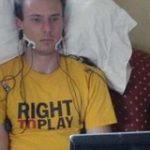