When Italy plays against France tomorrow in the World Cup final, some of its best players will be relying on a secret weapon.

Shoes with special cleats? No. Shorts that make a forward run faster? Not really.

Rather, the secret weapon in question is called the Mind Room and it was developed in Montreal.

For months now, at least four players on the Italian national team have been training in the Mind Room to prepare themselves mentally for clutch moments in the World Cup. Although the Mind Room is located in Italy, the biofeedback equipment was invented by Thought Technology Ltd. of Montreal.

Forward Alberto Gilardino, defender Alessandro Nesta as well as midfielders Andrea Pirlo and Gennaro Gattuso all swear by ProComp, the main device in the Mind Room. Although Nesta is injured, the other three are likely to play in the final.

“These guys have been trained by Bruno De Michelis, the head of sport science of AC Milan, to be able to focus, to concentrate and to get into the zone for their peak performance,” said Lawrence Klein, vice-president of Thought Technology.

“There is no question that mental preparation is the key difference, because these guys are all extraordinarily fit and talented. Our instrumentation helps the athletes reach that optimal state of mind.”

In the Mind Room, the athletes lie on reclining chairs, their bodies strapped to the ProComp device that measures seven physiological signs – from their brain waves and muscle tension to their breathing and heart rate. De Michelis then trains them to use their minds to reach a meditative state.

The next step is to teach the athletes to maintain that state while visualizing in their minds their athletic performance. They often watch videos of their performances on the pitch.

If they have a particular problem – like missing a penalty kick or hitting the crossbar – De Michelis will train them to relax mentally. He does this by first getting them into the meditative state, then showing them a video of their flawed performance for a couple of seconds. Naturally, their muscles will immediately tense and their blood pressure will go up as they watch the missed goal, but De Michelis will get them to relax again.

The psychologist will repeat this until the player can watch the flawed performance from start to finish while maintaining the meditative state.

The idea is that when they go out on the pitch and have to make the penalty kick, they’ll be so focused, so prepared mentally, that they won’t miss. They’ll be able to bring down their heart rate when they don’t have to run to conserve energy, and they’ll do that without even thinking.

“The athletes will be able to reach that state of mind when presented with challenges,” offered Hal Myers, the inventor of ProComp, who holds a doctorate in experimental medicine and is a part-time collector of Victorian-era medical equipment that adorns his office.

Klein and Myers, both sports buffs, founded Thought Technology in 1974 to devise instrumentation for stroke rehabilitation and other medical conditions. But they soon realized that their biofeedback technology can easily apply to athletics. Their modest offices occupy the second floor of a nondescript brick building in Notre Dame de Grace – hardly the place one would expect to find soccer’s secret weapon.

Reached by phone in Italy yesterday, De Michelis said that a number of companies specialize in bio- or neurofeedback, but he considers Thought Technology’s instrumentation to be the most reliable.

“These devices are just tools to train better mentally,” he said. “Integrated training gives you the capacity to recover through relaxation, to practise better, to concentrate better and to visualize in order to improve your skills.”

Not all of Italy’s players have used the Mind Room, only those who belong to AC Milan. So how have they performed?

During the World Cup, Pirlo has been making razor-sharp passes on the pitch. Although Gilardino has been used mostly as a substitute, he set up a crucial goal against Germany in the semifinal.

As for Gattuso, he has run hard in the midfield, often winning the ball. The Washington Post has described him as among the best players in the tournament, known for his “tenacious tackling.”

The Post predicted that “the battle between Gattuso and (France’s Zinedine) Zidane will be one of the key duels of the final.”

A final that might be decided more in the mind than on the pitch. 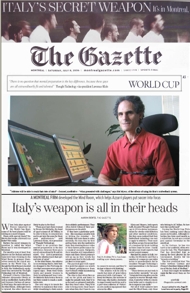